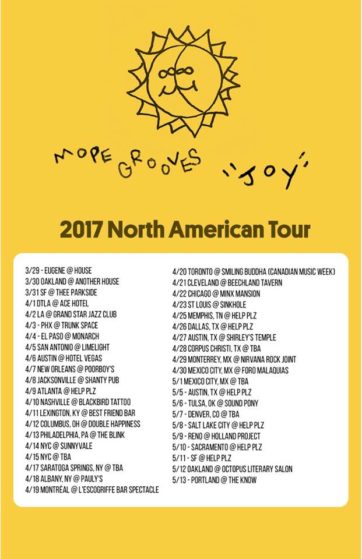 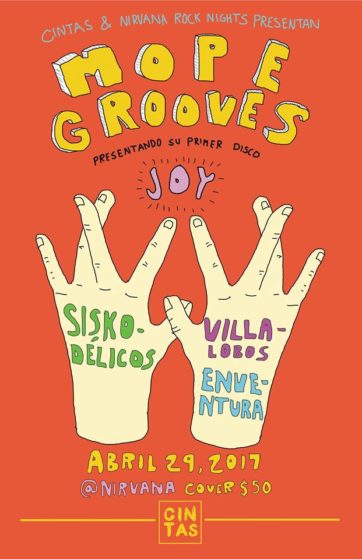 Mope Grooves’ full length debut Joy, released on See My Friends Records, is a fast-paced journey through different iterations of joy including hopeless joy, musical joy, dysphoric joy, and more. The album was created during a trying time in Stevie Pohlman’s life: in the midst of a severe nervous breakdown, which required professional help and hospitalization to recover from. The thirteen tracks on the album are surprisingly upbeat and catchy, given the context from which they sprang.

The album opens with “Hair Grows On,” a good reminder that the world keeps spinning during all of our most difficult times. The song gives off a retro feeling, like Mope Grooves could have snuck this on Sgt. Pepper’s Lonely Hearts Club Band and no one would have thought it didn’t belong there. It segues into “Y Try?” a question we are often stuck asking ourselves when the future feels so bleak and we’re overcome with a nihilistic worldview. “After work I’m the ghost of an invalid, watching my youth fly by,” Stevie sings over jangly guitars and a mesmerizing bass line. The pairing of such toe-tapping pleasant instrumentals with one of the most crushing life questions comes off a bit unsettling, like our darkest thoughts and feelings are always just lurking below the surface to overtake our happy days if we’d just pay them a little bit of attention.

The rolling drums and chugging bassline of “New Car” masks the discussion of the terrible process of looking for a new ride: debt, potential crashes, trying to trust other people on the road. The voices in our head often sabotage some should-be exciting moments in our lives. We’ve got to get out of our own way to enjoy what’s around us. “Sleep All Day” is a more low-key tune, with gentle guitar strumming and lyrics lamenting the fact that a day is being wasted in bed. “I did not mean to hurt them,” Stevie sings, knowing that his own illness is impacting others in a negative way, but still unable to do much about it. The guilt spiral just adds to the depression in an endless cycle, perfectly put into words by Stevie.

The band adds keys on “Shape of a Pocket,” which paired with wailing guitars and a steady, hand-clap beat over more chanted than sang lyrics will put you into a trance. “Have I mentioned money? Have I mentioned money?” Stevie asks as the song ends. There is always something to worry about. Title track “Joy” starts with unnerving guitar wails, like we’re at the bottom of a deep pit. Angry, crashing guitar pulls through with echoing voices moaning just behind the music. What are these voices trying to tell us? Like the ones in our own minds, they’re a bit distracting and it takes effort to focus on what’s really going on. We’re given a moment of reprieve to relax with light instrumental track “Little Songs,” but it lasts less than a minute, before launching us into “Z.”  The album ends with “Flip the Record,” with guest Patsy Gelb of Patsy’s Rats telling us to turn over a new leaf over gentle shakers and deep bass. It’s the perfect end to the album — it’s been an intense journey and the lightness of her voice with an organ accompaniment is very comforting.

Despite the heavy subject matter, this album still rocks. It’s a fantastic slice of micro-pop songs that shred through the very last note. Everyone should get a copy of this EP, and at $7, it’s a steal.

Available now on:
Back